AACLive! does not issue paper tickets. Online ticket purchases will be added to our reservation list. Please give the name on the reservation when you check in at the front door. Your PayPal receipt will serve as your confirmation. 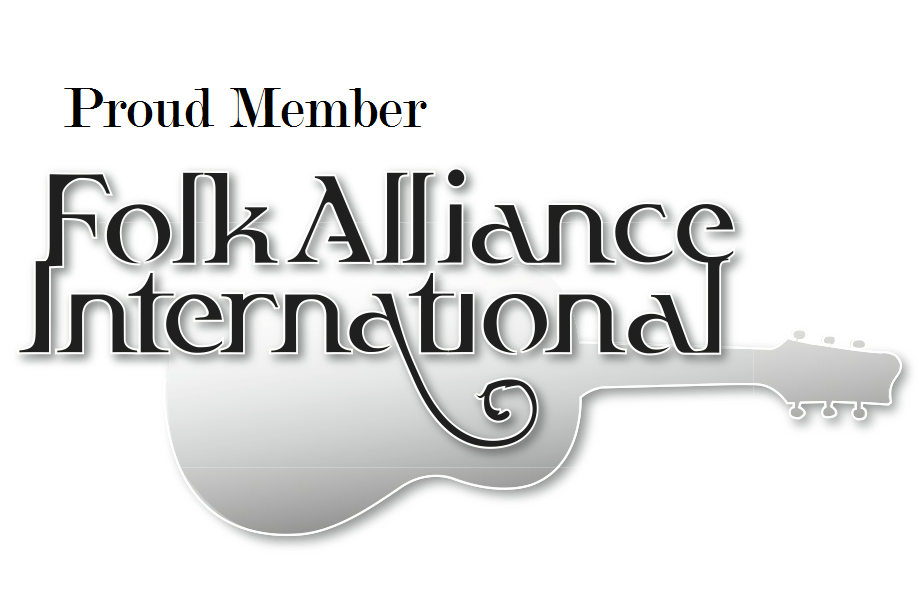 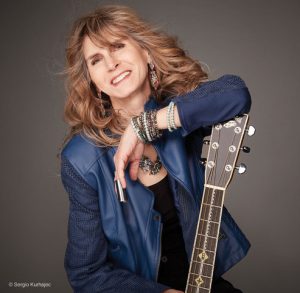 Heralded by the Blues Revue as one of the greatest living acoustic blues artists, Rory Block has committed her life and career to preserving the Delta blues tradition and bringing it to life for 21st century audiences around the world. A traditionalist and an innovator at the same time, she wields a fiery and haunting guitar and vocal style that redefines the boundaries of acoustic blues and folk.

Aurora “Rory” Block grew up in a Manhattan family with Bohemian leanings. Her father owned a Greenwich Village sandal shop, where musicians like Bob Dylan, Maria Muldaur and John Sebastian made occasional appearances. The rich and diverse Village scene was a constant influence on her cultural sensibilities. She was playing guitar by age ten, and by her early teens she was sitting in on the Sunday jam sessions in Washington Square Park.

In the 1990s, Block scored numerous awards and her visibility overseas increased dramatically when Best Blues and Originals, fueled by the single “Lovin’ Whiskey,” went gold in parts of Europe. She brought home Blues Music Awards four years in a row – two for Traditional Blues Female Artist of the Year, and two for Best Acoustic Blues Album of the Year. In 1997, she won the Blues Music Award for The Lady and Mr. Johnson, a tribute to Robert Johnson, taking home Acoustic Album of the Year.

Today, after more than twenty highly acclaimed releases and five Blues Music Awards, Block is at the absolute height of her creative powers, bringing a world full of life lessons to bear on what she calls “a total celebration of my beloved instrument and best friend, the guitar.” Her newest project, titled “The Mentor Series,” is a growing collection of tribute albums to the blues masters she knew in person. 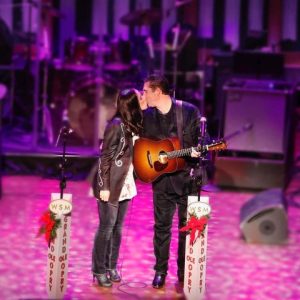 Darin and Brooke Aldridge are excited. And why not? With two new band members, a new record label, and five original songs on their latest album, the bluegrass and Americana duo are back with This Life We’re Livin,’ their ninth recorded project together, and a celebration of the space the husband-and-wife team now occupy – at the top of bluegrass music.

Brooke is a four-time consecutive winner for Female Vocalist of the Year for the International Bluegrass Music Association (IBMA) and nominated for a fifth time in 2021. Once a six-year member of The Country Gentlemen with the late Charlie Waller, Darin is a former IBMA Mentor of the Year and a truly gifted singer and multi-instrumentalist. Darin and Brooke were recognized with the IBMA’s nomination for 2021 Vocal Group of the Year. They have had multiple nominations over the years from the IBMA, the Society for the Preservation of Bluegrass Music of America (SPBGMA), and the Inspirational Country Music Association. They have enjoyed top spots on the Billboard, SiriusXM, Bluegrass Today, Bluegrass Unlimited, Americana/Roots, and Gospel charts. Their music videos have been featured on Country Music Television (CMT), CMT Edge, Great American Country (GAC), Bluegrass Ridge TV, and The Bluegrass Situation. They have a multitude of TV appearances, and they have graced the Grand Ole Opry stage more than thirty-five times.

In 2016 they joined forces with John Cowan, who plays bass for The Doobie Brothers, and a member of the Bluegrass Hall of Fame as co-founder of New Grass Revival. The collaboration has led to performance opportunities with artists ranging from Keb Mo’ to Country Music Hall of Famers Vince Gill and Jimmy Fortune (The Statler Brothers). Oak Ridge Boys singer Duane Allen notes, “The first time I saw Darin and Brooke, as I watched and listened, one word came to mind, ‘PURE.’ I loved recording with them. Their music is honest!!!” Joe Bonsall, the tenor singer for the Oaks, chimed in. “The Oak Ridge Boys love Darin and Brooke and considered it a huge honor to actually record a song with them … they represent class and amazing musicianship and vocal talent … Brooke is one of the premier pure voices in all of music, and quite frankly I just love them both.” 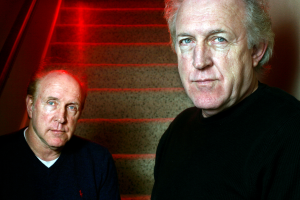 More than 50 years into their career, Earl and Ernie Cate are still hitting the high notes!  Although semi-retired in 2010 after 40 years on the road, the brothers still perform three or four shows per year, and AACLive! is super fortunate to be one of those chosen venues. You may remember the last time they appeared on our stage in 2015. What a show!

The Cate Brothers started performing together in the early 1960s, inspired by friends including Ronnie Hawkins and Levon Helm. Initially performing as The Del-Rays, they later called themselves The Cates Gang when they recorded their first album in 1970. The Cates’ music was always hard to classify. It was part soul, a little country, and prominently influenced by the early days of rock ‘n’ roll. They began performing under the moniker The Cate Brothers around the same time they signed to Elektra/Asylum Records. The Cate Brothers eponymous record was released in 1975 and contained the band’s biggest hit, “Union Man.” By then, the brothers had already been performing together for about 15 years, touring with The Band, Queen, and others.

Despite traveling the globe, the twin brothers always called Northwest Arkansas home. Ernie has quieted some in the decade, while Earl still likes to play his weathered ’57 Fender to sold-out crowds with acts such as Earl & Them which also often features David Renko, son of AACLive! co-founder Dick Renko, on sax.

Join us as we welcome the band that has been aptly dubbed “Arkansas Legends of Rock & Soul.” 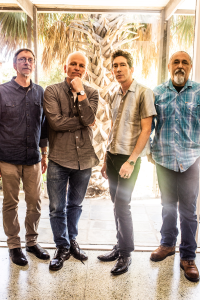 What if Americana actually encompassed ALL of the Americas? We’d have the Tejano and Conjunto sounds of the Texas/Mexico border region, as best exemplified by the accordion and bajo sexto, the American South’s Blues, Jazz and New Orleans R&B, and the lilting grace and fiery passion of the music of the Caribbean, Mexico, and Colombia. We’d also have one of New Orleans’ premier distillers of this musical mélange, The Iguanas.

The Iguanas redefine the notion of Americana, crossing cultures, styles, eras… and even languages. It’s as if Rue Bourbon, Muscle Shoals and Plaza México were all within earshot of each other and The Iguanas were the musical conduit between them.

Based out of New Orleans for the past couple of decades save for a short, Katrina-imposed exile in Austin the members of the Iguanas have (collectively or individually) played or recorded with everyone from Charlie Rich, Alex Chilton, and Willy DeVille to Emmylou Harris, Allen Toussaint, and Pretty Lights. Their two-decade ride has taken them all over the map musically and geographically, yet the inescapable patina of their hometown infuses every note they play.

Through eight studio albums, countless tours and Jazz Fest appearances, and a flood in 2005 that did its best to take their adopted city with it, it’s a testament to the band’s endurance that the same four guys that started playing in the early 1990s are still together. Joe Cabral is philosophical about the band’s persistence in the face of challenges that would have felled — indeed have felled — lesser bands. “First of all, this is all we know how to do; we’re musicians. But more than that,” he continues, “we respect the power of the band as an entity, and each individual in the band steps up to play his part. When it’s good, that’s really what it’s all about.”

Rod Hodges agrees. “l don’t want to get all heady and mystical about this, but it’s not really an outward reward we’re looking for. We all enjoy playing music, we all get along, and finding a group of people who can say that after all this time is a rare thing.” 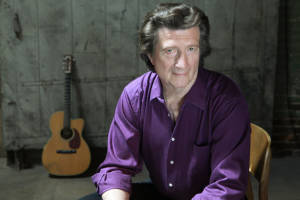 Chris Smither still has our deposit for a show which was slated before COVID-19.  He is eager to come back and play for us although challenges with routings have made it unlikely that he will be able to make for our 2022/2023 season.

According to the Associated Press, “Smither is an American original – a product of the musical melting pot and one of the absolute best singer-songwriters in the world.”

Chris Smither grew up in New Orleans where he first started playing music as a child. He was taught the rudiments of instrumentation by his uncle on his mother’s ukulele. “My Uncle Howard,” Smither says, “showed me that if you knew three chords, you could play a lot of the songs you heard on the radio. And if you knew four chords, you could pretty much rule the world.” With that bit of knowledge under his belt, he was hooked. “I’ve always loved acoustic music – specifically the blues.”

Smither’s impressive musical career, spanning almost 50 years, includes eighteen albums, seven books, several film projects, and his songs have been covered by Diana Krall, Bonnie Raitt, Emmylou Harris, Esther Phillips, John Mayall and Rosalie Sorrels. He’s shared the stage with countless renowned musicians and we are thrilled to have him once again on ours.